TANGO FANTASIA STYLE: DID YOU KNOW THAT? 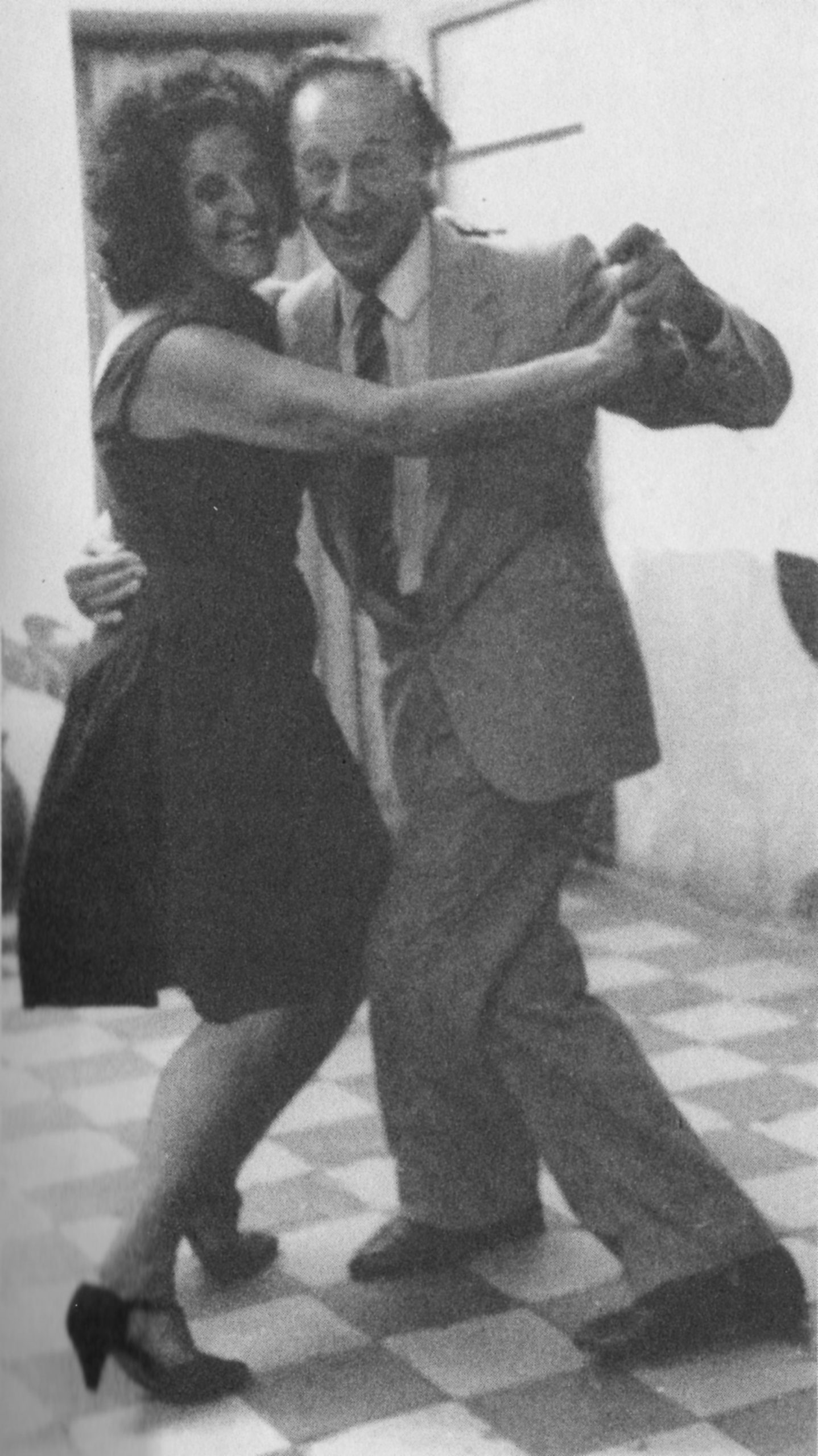 Who was and what did Jorge Márquez do for tango

When we talk about tango styles, we sometimes mention the fantasy style. But would you like to know who developed it and how? So this post interests you, because I’m going to show you the life of Jorge Márquez, one of the most advanced men of his time who gave tango.

It is likely that you have rarely or never heard of Jorge Márquez. Sometimes life can seem unfair to some creators. Especially with the dancers. But sooner or later, like now, there is an opportunity to redress that injustice. For this reason, on this occasion, I am going to tell you who “El Loco Márquez” was and what he did for tango.

As we already know, a life cannot be summed up in a short text. But yes, at least, highlight the most notorious aspects of him.

Jorge Márquez was born in 1908 in the Nueva Pompeya neighborhood, known as Pompeya, a proletarian neighborhood, to which Homero Manzi years later would dedicate the tango “Sur”. A neighborhood with a tango tradition, if there are any.Márquez was the son of a Yugoslav immigrant, a sailor, –who arrived in Buenos Aires at the beginning of the 20th century anticipating that a war was coming in his country–, and of an Argentine woman from the city of Campana, an industrial, oil-producing region that It was the cradle of the Argentine automobile and the barbecue strip.

At that time, Pompeii was one step away from the Riachuelo. A small river that was used for shallow draft boats.
And there Márquez’s cousin, who worked as a stevedore, took little Jorge when he was 10 years old. A memory that the child would have a good memory and that you will see later why I am telling you this.

The truth is that there, in the port, the boy saw how his cousin and others loaded bags of peaches, bananas and watermelons and then left them on the big steamboats; he watched the boys run and jump with those sacks they carried over their shoulders as they passed a narrow board that connected the steam to the dock and bent under their feet. Look how I walk! They said to him. And Marquez laughed; but he would never forget those pirouettes of great agility.
Two years later, at the age of 12, he went to work in Valentín Alsina’s Wilson refrigerator. His first job paid for him. And it would have been an unimportant job, if it weren’t for the fact that there, between hooks and frozen meats, one of those moments that seem insignificant occurred, but that would have an unimaginable transcendence.
He met Graus, a worker son of Spaniards, who told him: “Che, kid, why don’t you come home so I can teach you to dance tango?”

What would Graus have noticed in that boy? We don’t know. But the truth is that a few weeks later, when he returned from work, Jorgito would go to the night to learn to dance at the Graus’ house. And for that, he crossed the bridge over the Riachuelo that separated Pompeya from Valentín Alsina, a bridge today called Ezequiel Demonty; but which everyone calls until today “Puente Alsina”.
It was the time when, to cross it, women carried a knife in the middle to defend themselves from men who wanted to abuse them and many men carried revolver to kill each other.

But either because of the unawareness of the danger or because of his own courage, the boy did not care. He would go from work to class and from class to home. Thus he spent hours practicing with the music of Francisco Canaro and Ángel Villoldo.
Let us also think that in that 1920 Argentina was so splendid that even the dictionaries of the time spoke of how it would compete against the United States for a successful future.

A stumble any given in life

So between the economic recovery that he was beginning to appear, the general feeling of being able to imagine a future and the appearance of the D ’Arienzo orchestra in 1935, Márquez reappeared in the clubs to play milongues and show his abilities.
“D’Arienzo was a great teacher, he was everything to me. As soon as I heard it, I began to do everything that came to mind. ”

And it was true. Márquez took up tango with such strength and originality that some regional newspapers began to publish that he was a great creator. Márquez does incredible things, they said, and of course the clubs were packed.
Because unlike others, Márquez always considered tango as something happy and reflected it in his way of dancing. And he well he danced the styles of the moment: shore tango, canyengue tango, salon tango.

He was so bold or innovative in his movements, that more than once he was thrown out of the club along with Mary, his dancer. In fact, almost everyone threw him out for thinking that he mistreated the woman by making her jump from one side to the other, on her knees, even pregnant. But the truth is that the man was imitating the memory of his cousin stevedore on the wooden slat. That is why the owners of the salons –Turkish, Italian and Portuguese– shouted at him: “Go to the street, so you can’t dance here, go to the port!” “Porteño, go to the port!”
Some said that he was crazy and, in addition to knowing him as the Argentine Fred Astaire ”, he also began to know him as“ the crazy Márquez ”.
In spite of everything, Márquez loved the neighborhood clubs, and even more so the women who danced very well in the neighborhood clubs. It was there that he cooked steps and movements, and by flexing his leg he developed the fantasy-style tango. Why did he bend his knees when he danced? Because he discovered that Astaire flexed them to make the badges on his tap dance shoes click.

Fashion, the embrace and a revolutionary change for tango

Also, of course, fashion influenced.
It was the time when women wore ankle length skirts and men wore a scarf over their hand before taking the dancer’s hand.
Then he began to defy the times. He thought, almost like no other, about the importance of women in dance, in the role that he assumed within the tango couple and their clothing.
Perhaps today it seems inconsequential to us; But by the early 1940s, it was a truly revolutionary idea.
And this idea was also supported by the popularity of Rico Tipo magazine, by the great cartoonist Divito, who directed Buenos Aires fashion like no other.
So, against all the criticism, Márquez shortened his dancer’s skirt so that her legs could be seen, and in that space he began to put his own legs and bend them around the knee, until they looked like those hooks that he once saw hanging on the Fridge. He lifted his feet off the floor and performed the jumps as he would have seen in the port, and released the woman to move her away and draw her towards hers, her body, in the best style of her admired Fred Astaire.
The truth is that Márquez never liked long skirts. He believed that women’s legs should be appreciated in dance. An unusual gesture for the time that was linked to another: that the dancer not only be seen in the foreground, but the woman with whom he danced be recognized and together they share the value of applause.
In an interview conducted by Gabriela Hanna, published in a German book, Márquez said: “When I started dancing, I used a very close hug with women. Later I realized that if she always dances like this, the woman could not dance well, she was tied up. If I wanted to do my thing with the woman, I had to break the connection with her, let her go. I don’t want us to fall asleep dancing, I want her to show her thing, to do something. ”
So against all the established norms, Márquez broke the embrace, and showed that tango was not just walking embraced, but that he could dance it in another way. Of course, it was difficult to argue with someone who was equally fluent in salon tango, canyengue tango and shore tango.
At that time, he was already thinking: “You have to dance tango, you have to know how to dance it and you have to give it quality”.

Take a look of this video!

The master of fantasy tango

At the beginning of the 1940s, “El Loco Márquez” and Mary began to collect their performances in Buenos Aires clubs and later to give exhibitions in Mar del Plata, a beautiful seaside resort. They turned professionals and for a time they became the soloist dance partner of maestro Francisco Canaro.
Márquez even became such a renowned fantasy tango teacher that Pompeii students came to him to learn how to dance. Among them, the young Eduardo Arquimbau, who would later form the couple Gloria and Eduardo.

He spent years between classes, exhibitions and frequenting the club milonga. He surrounded himself with friends, like Eduardo himself, with whom they shared exhibitions, and the young teacher and dancer Raúl Bravo.

But towards the 1960s she began to feel that her body and her way of thinking were changing.

Perhaps that is why, sometime, while he was sitting in the milonga, he saw a young dancer dance too fast and told him: “Kid, dance more calmly, tango has pauses.” Of course, the young man listened to the recommendation, although he still couldn’t control his movements well; But he asked him what his name was and, after answering him, that already old milonguero also asked him his name. Then the boy looked straight at him and answered him. His name was Carlos Gavito.

Over time, Márquez had Lilian as a partner. He left his native Pompeii and moved to Villa Real, a peaceful neighborhood of low houses, humble people and little population.
He spent his years there, until according to his friend Raúl Bravo, in his 90s, he ended his life in a nursing home affected by Parkinson’s disease.

Márquez, the “Argentinean Fred Astaire”, “El Loco Márquez”, “the number 1 of fantasy tango”, are some of the names by which some still remember him. He was a creator of the tango dance, an advance in modern figures who would open the doors to develop the spectacular in the exhibitions and later the stage tango.

Somehow, all those who today dance fantasy-style tango and perform jumps and hooks pay homage to him without knowing it. But if you got this far with reading, you have already helped me to correct an injustice: to prevent memory from being porous to oblivion.

WHO WAS AND WHAT ANTONIO TODARO DID FOR TANGO
13 September, 2021

WHO WAS PETRÓLEO AND WHAT HE REALLY DID FOR TANGO
3 June, 2021